Bill was ticked. He had just taken delivery of a new coach, and the factory had refused his request to set the governor at 77 m.p.h.

After his first trip, he called, laughing. “The new bus got us there an hour sooner. It did not go as fast down hill, but climbed every grade at the speed limit.” This was the mid 90s and Bill (like most of us) had just discovered that new four-stroke engines had tons of torque, and were lots stronger than two-strokes.

Grumbling is fun, but lots of things are better these days. Despite the fact that none of you have asked, it might be fun to do a countdown of the top 10 technologies that have improved bussy life.

Number 10 – Alternators. In ye olden days everyone had generators that did not put out a ton of juice, particularly at idle. Not only that, bus builders, for quaint rea-sons, made many coaches positive ground. Jump starting offered numerous opportu-nities for mischief. Modern alternators push tons of electrons and part of the design cri-teria for coaches is that they work pretty well at low RPMs. Generators took a month or so to fully charge a battery. Alternators get ‘er done much faster.

Number 9 – Air Driers. You probably do not remember life before air driers. In fact, the darn things are so good, you prob-ably do not give them the affection they deserve. Back in the day you rolled under a bus at least once a day to drain condensation from the air tanks. Sometimes the bus spit on you; and in the winter, those jewels froze.

One crafty solution was an alcohol system that injected a bit of nasty stuff into the system to prevent curdling. It worked almost half the time. When it did not, moisture tended to freeze the delicate valves that controlled things like suspension and brakes. Nothing was more bracing than rolling under a bus on a winter morning, with torch in hand and thawing the air system one part at a time. Every time the do-dad you were heating began hissing, you could move on to the next. If you neglected to drain the tanks, they filled with water. When a tank is three-quarters full of water, there is not much room for compressed air. You would step on the brakes and the air pressure gauge dropped faster than the speedometer.

Modern air driers (and automatic tank drains) have another endearing trait. They occasionally discharge over a puddle as cranky passengers are passing nearby. When that happens, you must fight off the urge to hug the air drier.

Number 8 – Lavatories. It was tempting to call them number one or two. Aside from the entertainment they sometimes provide, they do speed things up. Bus builders now install big fuel tanks to boost range. Before lavatories, range was determined by bladder size. Drivers had to stop every few hours and part of their job was to make sure everyone used the facilities.

Number 7 – Entertainment Systems. This started with drivers shouting announcements over the din of the engine, and evolved into PA systems. Passengers brought their own entertainment (books). Attempts at providing radio broadcasts failed because the buses kept (predictably) moving out of the station’s range. In the 1970s some of my compatriots found a way to hook an eight-track to the PA, but it was not until the 1980s that monitors playing video tapes found their way into coaches, along with music from cassettes. Very quickly it became impossible to use a bus in charter service if it lacked a video system.

Some modern coaches sport monitors as large as 22 inches, but the trend is backwards. Folks are bringing their own entertainment and need only WiFi and a bit of 110 volt current to be happy. What is next? Books?

Number 6 – Brakes. Modern brakes can actually stop a coach in less than a city block. Early drum brakes merely suggested to the coach that stopping would be nice. Later drum brakes were more insistent; you no longer needed a lookout to spot obstructions hundreds of yards ahead. Now we have real brakes. They can stop a 50,000 pound bus faster than some SUVs. In the hands of a skilled driver they can launch a passenger exiting the lavatory down the aisle and plumb out the front door.

Number 5 – Air Conditioning. We welcomed air conditioning that actually works. Introduced in a limited way before WWII, it remained optional until the late 1950s.

Prior to 1960 most AC compressors were driven by small “pony” motors, because coaches engines did not have the horse-power to move the bus and cool it. Pony motors were a maintenance headache, and many were gas. Few things are more exciting than putting diesel in a gasoline tank. One is filling a diesel tank with gas. Do not ask how I know this.

Number 4 – BIG Windows. Until the mid-50s coach windows were tiny for several reasons. Early AC was marginally able to resist radiant heat. Window sashes were heavy did little to reinforce structure, and heck, passengers rode buses because they had to. The GM PD4104 changed that. In addition to making coaches more inviting, passengers could see outside.

Coach builders opted for sealed windows, eliminating those irritating instances where passengers hung their limbs outside the bus and had them lopped off. One additional benefit was that increasing visibility reduced the incidence of motion sickness. Of course now, in the rare instance of mal de mer, passengers are confronted with windows that do not open.

Number 3 – Real Suspension. Air or torsion bar – your choice. Both were a huge advance over springs. Ride and handling have continually improved in recent years. The old guys remember springs as being simple and trouble free.

Springs offered a stiff ride, coupled with the ability to break at bad moments. Some of these suckers came with shock absorbers that periodically had to be refilled with oil.

Passengers do not need to use as much energy fighting modern coaches motion. Now they retain sufficient energy to ask silly questions, and break seats.

Number 2 – Power Steering. Years ago there was a running joke that a guy who drove a Brill consistently had one arm that was longer than the other from grappling with the steering wheel. It was always a “guy” because few women were powerful (or dumb) enough to wrestle these jewels down the road. Steering wheels were enormous in order to provide leverage, and you did not just “turn” a coach – you planned ahead and navigated it like a ship.

Power steering has made it possible for folks who do not have an arm so long and powerful that the knuckles drag on the ground, to drive commercially.

Number 1 – The Modern Drive Train. Admittedly, this is cheating, because it includes both engine and transmission, but I ran out of numbers.

Automatics began to gain popularity in 1974 when Greyhound had them installed in MC-8s. In addition to simplifying training, they reduced body damage (drivers could use their hands to steer rather than shift). It is a mixed blessing, but they accelerate much faster than a manual. Improved over the years, they now shift smoother and are more fuel efficient than all but the most skilled “stick” drivers.

The transition from gasoline to diesel power following WWII was a monumental leap – mostly forward – but gas engines had a few endearing traits. Diesel exhaust is nasty, but gasoline fumes are fatal. In an effort to retain live passengers, several bus builders installed the engine’s air intake on the passenger cabin floor, ensuring a proper turnover of fresh air. Some miscreants found a way to make the bus backfire, shooting blue flame along the floor for several feet.

Another trick was to briefly cut the ignition on the Brills’ 797-cubic-inch Hall Scott engine. While the spark plugs were loafing, fuel that should have been burning in the cylinders wandered into the exhaust manifold. Turning the switch back on produced a huge “boom” and an explosive ball of orange flame out the exhaust pipe. It was resoundingly (pun intended) successful at discouraging tailgaters, and properly executed in a tunnel –wow. It is kinda like a modern engine’s forced regeneration – with pizzaz.

A modern diesel’s exhaust is virtually cleaner than the air it is inhaling, and new coaches can accelerate fast enough at red lights to irritate a BMW driver (in addition to the bus passengers). The only thing entertaining about them is their proclivity to demand regeneration at awkward times. Depending on where the exhaust is, they can create thermal events when parked on dry grass or under a portico.

Fun, but not like the orange fireball. Ah, the good ole days. 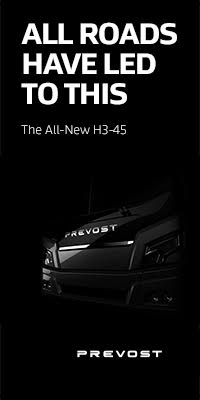